And so the halfway point of the programme came around just as quickly as everyone had previously warned us, and before you know it we were all packed into matatus (public buses here) heading to a rather famous Kenyan lake for two nights of fun and reflection (and giraffes!). The Mid Placement Review is intended for volunteers to reflect on their time so far on the programme, as well as acting as a break from the stresses of the programme, seeing a new part of the country. For our MPR, we visited Crater Lake Camp, at Lake Naivasha. Before we go any further, the site is BEAUTIFUL – and that’s not even including the magnificent Naivasha scenery. Naivasha is a must see.

Organised by the wonderful MPR committee, the 5am start on Friday morning was all part of the excitement and ensured time and fun was maximised on the trip. Crater Lake game reserve itself boasts of zebras, giraffes, Buffaloes, monkeys and hippos alongside many exotic birds. The highlight of the weekend for many was the ‘hike’ that had been organised for Saturday morning. What was assumed to be a hike around the Crater Lake “hills”, turned out to be a walking safari, in which everyone got to walk the park freely. The 4 hour hike (and again an early start) was immediately so worth it, to be roaming with the zebras and giraffes (OK yes I’m tall and yes it was like reuniting with my family). We saw SO MANY giraffes. SO MANY. If you’re thinking of doing a Balloon placement don’t think it’s all work work work, sometimes you need time to reflect (*or shall we say review*) your time on the programme (and that means giraffe pics!).

If you can’t spot the giraffe, this photo has gone to waste

One of the best parts of the MPR weekend, other than the organised activities, were the free time moments. The programme is undoubtedly centred around being a united team cross-culturally, supporting fellow volunteers to achieve the overall goal. Free time meant everyone was able to relax this weekend, where people could do as they pleased, watching a film, hanging out at the pool or going on another hike. Everything about free time was based around doing whatever you as an individual wanted to do, and that’s sometimes needed after a five week stint as a solid (wolf)pack. 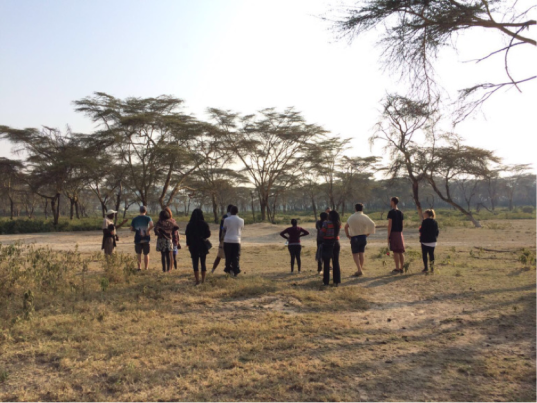 We volunteers were not left to our own devices for the entire weekend, however. The wonderful MPR budget stretched to a evening team dinner at the campsite restaurant on Saturday evening. This evening included an activity whereby volunteers reflected on one another. The task was simple; write one positive sentence about each member of the team on a sheet of paper, and that volunteer is then left with that sheet of 16 positive things that people like about them (how’s that for a feel-good!). Whilst seemingly insignificant before we begun the activity, and we were questioning whether it would work, every single person in that room had a smile on their face when reading their comments. Surely that’s enough evidence that teams made up of different nationalities, cultures and tribes work.

With each MPR being so different there would be little point in detailing all the ins and outs of our weekend. When planning your MPR, remember it’s a weekend organised by volunteers, for volunteers. And that’s the best part of the MPR, it’s a chance to reflect upon the whole programme – people coming together, creating and innovating, for the good of others.
N.B: if camping in a game reserve park, be sure there are no predators (fortunately Crater Lake was predator-free).