The single story is one of the stories that has misplaced most of our views about world. It has created in our minds the two pictures; the superiority versus the inferiority and the judgemental views based on the colour of our skin but not the character of the individual, the appearance of our hair but not the air that we breathe.

The single story is a strong and destructive weapon that can wipe out entire generations within seconds. When I was in the University of Nairobi, (ranked number seven in Africa and first in Kenya) most of the books that I read were written by the western scholars. I therefore preferred their way of thinking and could argue using evidence of such scholars to a fuller extent. The question is; why was I doing that? It is because, in my mind set, I believed that such scholars were more superior to the African scholars (Kenyan scholars). I believed that they could contextualise events to a greater degree in comparison to African scholars. As a result this made me anticipate the arrival of the UK volunteers with a lot of fear and also with a sense of inferiority.

I know most of the readers are now left wondering about all that I have said, however this was what I was feeling within myself and I believe my colleagues from Kenya were also on the same page as me. This condition can make such an eloquent person to fumble and mumble with words in front of those that they feel to be superior to them, hence making them not clear and coherent on the subject matter. It can also make you shake and sweat; you wonder how the day can be so hot, yet the morning is cool. This is how fear and inferiority can make someone feel at times.

We were in Nakuru, waiting for our fellow volunteers from the UK, they arrived a little late, maybe this was because I was in a panic and that may have been the reason as to why I was conscious of the time of their arrival. We greeted them as was expected of us but to be honest, I was pretty tense. I was giving them a smile and a firm Kenyan handshake but inwardly I was weak and could fall down even at the slightest of nudges. Their smiles and warm replies to our greetings comforted me a little, that feeling of comfort spread through my whole body and I slowly started feeling as though they are just like us, even though our skin colours may be different. At the same time I was at ease to know that they were just our peers and consequently it was easy to exchange the smiles. 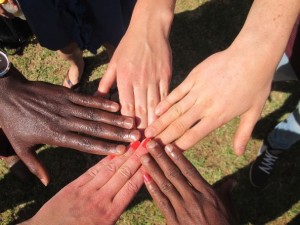 I first started talking to Richard, from Chesterfield. Of whom, understanding his accent was, at first not easy; I could closely watch how his lips were moving in order to pick a few words from each sentence just to have a grasp of what he was saying.

Then came Simon, from Brighton. Together we boarded the same Matatu (mini-bus) to Kericho; he actually made me feel at home instead of me embracing him to Kenyan life. I found myself contributing to the conversation and together we laughed most of the way, this is because I found that most of his stories and jokes to be similar to mine. Other volunteers were wondering what we were laughing about but the Kenyan’s knew me to be a humorous guy and showed little interest.

Next was Tim, a business lawyer from Manchester, who was to be my roommate for the week at Tea Hotel while we conducted our training. He is one of the coolest guys I have ever met, we talked about the studies of law and business, in both the UK and Kenya.

I was later given a host family. Jim from Southampton and I are staying together, we are good friends and almost like brothers; there are numerous similarities and this continuously blows my mind day after day.

Isaac from Nottingham, Isabelle (Isy) from Elgin (a place in the middle of Inverness and Aberdeen) and I are together on a team. We are charged with sharing Balloon’s intensive curriculum in the field with the entrepreneurs. This has further opened my way of thinking and also working, because the thoughts we have are very similar and we have a good chemistry between us.

Through interaction with the UK volunteers I must say that they have proved me wrong. They have made me realise that we are similar, even though we are both from different continents, which ascertains that we are all human beings. Balloon Ventures has heightened my way of thinking from myopic to a global approach, it has demystified my previous opinions on the superiority of others.

During an intensive one week training with Balloon, I could hear both Kenyan and UK volunteers contributing with such a degree of similarity between thoughts and opinions that I was in awe. I thank the Balloon Ventures team for creating such a platform; one in which we as volunteers and the entrepreneurs can come together and act now but think big using such a clear and concise system. As Eric Kinoti, the well known Kenyan entrepreneur said; ‘You should not wait to have a lot of money before you can venture into business. You should think big, start small and start now’.