Finding Warmth, Humor, and the Courage to be Vulnerable

It’s been almost six weeks since my fairly traumatic plane ride to Kenya (turbulence is no joke), and my Balloon Kenya experience so far has varied from good, to bad, to ridiculous. But mostly good. 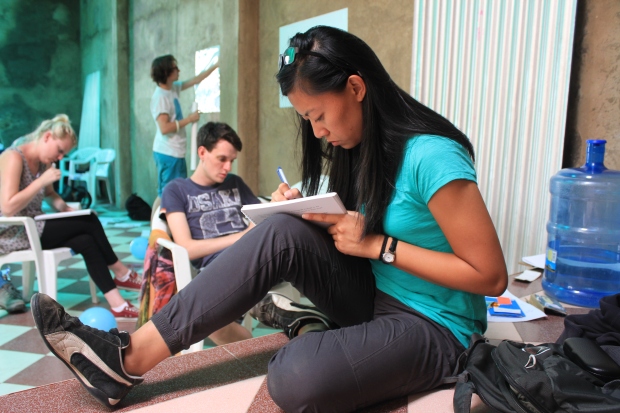 During my second week here, I moved to a small town called Molo. At 2,506 meters above sea level, it’s a pretty quiet place where the hills are green and sheep line the streets. Children are also seen playing with tyres alongside the roads. Quite a contrast from all of the places I’ve grown up (San Francisco Bay Area and Los Angeles).

Not to mention, the average temperature of Molo is about zero degrees Fahrenheit. Considering my Californian-grown body can’t cope with any weather colder than 70 degrees Fahrenheit, this is not an exaggeration. I also apologize for not knowing how to convert Fahrenheit to Celsius. All of the dust and dampness in the air have not been kind to my sinuses or my Kleenex budget. Every night, I find myself sitting by the fireplace because our rooms are practically ice boxes.

Throughout the week, I travel about 20 minutes to another town called Elburgon. I’d also like to mention that I always pass by a business called “Lil Wayne Salon” during this commute. I’m a fan. There, I have to deal with men — both drunk and sober — calling me “Chino” and shouting “Ching chong!” at me.

Still, my experiences in Kenya have been mostly good.

Because of the cold weather, my fashion sense has increased exponentially. I get to wear a scarf and really great, brightly-colored retro jackets that I buy second-hand from the markets. Additionally, I have been formally introduced to rain-proof boots called “Wellies.” American fashion runways better watch out, because I’ve been walking through the streets of Africa in style.

It’s also pretty cozy sitting next to a fireplace. The fire’s warmth fosters conversation and banter amongst all of the Molo fellows, and every time a hotel worker comes to fix the fire I am presented with the opportunity to learn some Swahili. “Moto” = Fire. “Kuni” = Firewood. Man, I’m almost as good as Google Translate.

Though living in ethnically diverse cities has conditioned me to find offense in being called “Chino,” Kenya has conditioned me to find humor in the circumstances. I no longer feel the urge to shout back “I’m not Chinese! I’m American! My background stems from the Philippines! That’s why I look this way!” but instead, decide to revel in the fact that people here absolutely love my straight black hair. Some people will even come up to me just to touch it. What else can I do besides laugh?

What has been most impactful for me, though, stretches far beyond learning to adapt to different weather conditions and finding humor in situations. Every day, I am inspired by my entrepreneurs’ willingness to be vulnerable — to share so openly and passionately their business ideas, their homes, and their experiences.

As someone who considers herself pretty reserved in sharing her honest thoughts and opinions — and often disguises them through humor and sarcasm — I find it incredibly courageous that my entrepreneurs share themselves so freely. I wouldn’t dare talk about my finances, passions, and ideas so vulnerably for fear of being shamed or criticized. I wouldn’t dare cook for another person for fear of people thinking it tasted badly. I wouldn’t dare talk about difficult challenges I’ve had to face for fear of seeming like I don’t have everything together. Throughout my years in school, I never even let other people proof-read my essays because I feared appearing incapable of writing well.

However many of my entrepreneurs hold a “take me or leave me” type of attitude. Throughout my six weeks here, I have received countless invitations to people’s homes and have been showered with nothing but warmth. The people I’ve met here are a lot more open about themselves than what I am accustomed to. It has been a privilege to hear people share their stories, ideals, and motivations with me, and I will ultimately return to America with more courage to be vulnerable.

← The Street Kids of Nakuru!
Was it worth it? →